What’s the Difference Between Paleo and Keto?

Nowadays it seems like you can’t scan a restaurant menu, read a health magazine, or scroll through social media without words like “keto-approved” or “paleo-friendly” popping up.

These two diets have worked their way deep into the mainstream as part of the growing conversation about weight loss, clean eating, and real vs. processed foods.

But what are keto and paleo diets all about? Are they safe? Why do so many people follow them, and what exactly is it they can and can’t eat?

If you’re curious about these two popular lifestyles, keep reading to learn the basics and see how they compare.

What is the paleo diet?

This eating plan is based on what our ancient ancestors ate during the Paleolithic period, when they got their food by hunting, fishing, and gathering. It’s sometimes called the caveman diet.

Also known as the Old Stone Age, the Paleolthic era came before the invention of farming and agriculture. So, eating paleo means consuming only whole, unprocessed foods, like fruit, vegetables, fish, meat, eggs, and nuts.

Dairy products, grains, legumes, and artificial ingredients are not allowed.

One reason, known as the evolutionary discordance hypothesis, theorizes that the human body is genetically built for the type of diet our caveman and cavewoman ancestors ate.

According to this hypothesis, our digestive systems stopped evolving around 10,000 years ago, so our bodies are not well-equipped for the modern diet that emerged when farming was invented.

Is there any truth to this theory?

Although evidence has emerged suggesting that in fact, humans have continued to evolve since the Paleothic, it is true that our modern diets and lifestyles are unhealthy in many ways.

For example, ultra-processed foods have been linked to overeating, obesity, and multiple health problems. And yet, they make up around 50% of many people’s diets.

It is also true that some people have allergies or intolerances to foods that have emerged after the invention of agriculture, such as grains (gluten) and dairy. Since paleo eliminates these food groups, it may be especially beneficial for people with specific food intolerances.

Is paleo the same as keto?

No, they are two different diets that are based on different philosophies.

The goal of paleo is to follow the same natural food diet as ancient hunter-gatherers.

The main objective of keto is to eat only a small amount of carbohydrates so that the body burns fat for fuel instead of carbs.

However, paleo is also low-carb, and there is a lot of overlap between foods that are paleo-friendly and keto-friendly.

It is possible to combine paleo and keto, they are compatible diets.

Similarities between paleo and keto

These diets have three big things in common.

Paleo vs. keto for weight loss

Both diets can be effective for achieving a healthy weight.

Paleo cuts out highly processed products and added sugars, which can help limit calories and lead to weight loss.

A ketogenic plan also strictly limits these foods. In addition, it further boosts weight loss by making the body enter a metabolic state in which it burns fat for fuel (called ketosis).

Keto is often more effective for weight loss than paleo. Not only due to the power of ketosis, but also because you have to plan your meals to ensure you stay within your daily limits for carbs and protein. This may keep your calorie count from getting too high.

No matter what you eat, you need to have a caloric deficit to lose weight. If there are no restrictions to how much you can eat, you can actually gain weight, even if you’re eating healthier foods.

Paleo versus keto for diabetes

Both eating styles can be useful for diabetes through

If you have diabetes, always speak with your doctor before changing your diet.

Both paleo and keto are low in carbohydrates, but for different reasons.

Why? For one, because these foods cannot be hunted or gathered; they rely on agriculture.

Also, grains and legumes contain lectins, which paleo proponents believe can cause inflammation and block nutrient absorption. (Critics say these are only a problem for people with allergies or intolerances.)

Similarly, keto severely limits all high-carb foods, including grains, legumes, all sugars, and most fruits.

Why? To get you into ketosis, when your body burns fat for energy instead of carbohydrates. To do this, you must keep your carb intake very low.

Keto is lower carb than paleo because it requires you to stay under a daily number of carbs. On paleo you will naturally eat less carbs since you eliminate foods like pasta, bread, and soda, but you can still eat unlimited amounts of fruit and other carb-containing foods.

Both plans encourage cooking at home with real, fresh ingredients.

(When in doubt, ask yourself if a hunter-gatherer could stumble across it in their natural environment. Hydrogenated oil? Not so much.)

The ketogenic lifestyle advocates for whole, natural foods and discourages processed foods. But technically, any product can be keto-friendly as long as it doesn’t take you over your daily carbohydrate limit.

Paleo is cleaner because it completely eliminates processed foods. With a ketogenic plan, it is ultimately up to the person to eat clean or “dirty”. 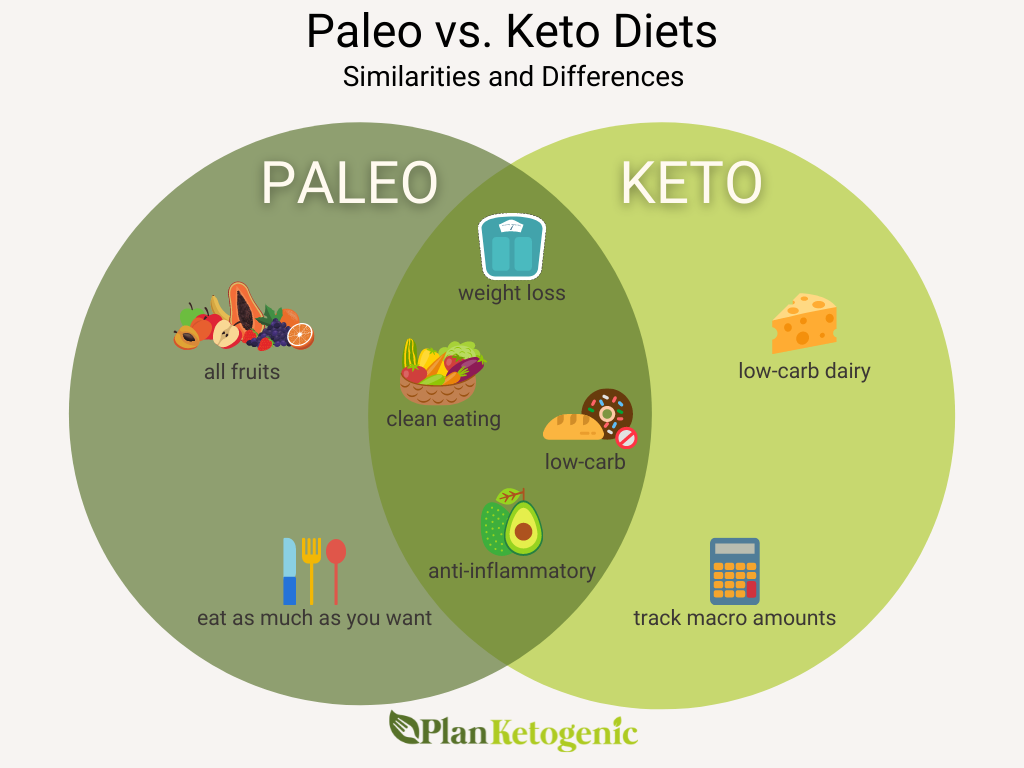 Differences between paleo and keto

Paleo vs. keto for inflammation

Studies and anecdotal evidence have shown both lifestyles can be anti-inflammatory.

This makes sense because they both eliminate many foods that cause inflammation, such as refined carbohydrates, fried foods, and sugary soft drinks.

They also include foods that fight it, such as olive oil, leafy greens, tomatoes, fatty fish, almonds, and walnuts.

Paleo may be better for inflammation because it also eliminates processed meats, like sausage and bacon, and includes more fruits. However, keto may be more effective for weight loss, and obesity is also a risk factor.

Neither diet is perfect. Both include red meat, which is known to cause inflammation.

Keto vs paleo for bodybuilding

Athletes may prefer paleo to keto because there are no limits to the amounts of protein or carbs you can eat. These macronutrients are important for growing muscle mass and repairing muscles after weight training. (Keep in mind that your carbs won’t come from grains, so no pasta or bread, but they can come from fruits and vegetables.)

Keto may work better for reducing body fat, which is also helpful for bodybuilders as it makes muscles more visible and defined.

Both diets can be good for athletes in that they reduce your intake of processed foods that provide empty calories and increase your consumption of healthy natural foods your body can use for energy and recovery.

If you change your diet, be prepared to lower the intensity of your workouts at first so that your body has time to adapt.

A key difference between paleo and keto is tracking macros, or macronutrients.

For paleo, you don’t have to count the amounts of carbs, protein, and fat you eat.

For keto, however, it is essential that you keep track of macros, especially carbs. The amounts to follow are 5-10% carbohydrates, 20% protein, and 70-80% fats. An easy rule of thumb is to eat between 20-50 grams of net carbs per day, but the exact numbers are different for each person, depending on age, weight, and lifestyle.

Benefits of paleo and keto

When followed correctly, these ways of eating can offer multiple benefits, including:

Advantages of paleo vs. keto

Let’s see how these two eating patterns compare side by side, and why you may want to choose one over the other.

Side effects of paleo and keto

Both of these diets can have negative impacts, including:

Let’s take a look at which foods to eat or avoid for these two eating styles.

Keep in mind that even while following a diet, each person has some flexibility to decide how strict they need or want to be. Guidelines are helpful, but there are many grey areas, and you can make your own decisions based on what feels right for your body and your priorities.

That said, here’s a look of which foods are and are not generally allowed.

This table provides a quick peek at how these two ways of eating overlap and diverge in terms of what you can eat, but there’s a lot more to learn. Luckily, there are lots of free resources available online, like this extensive index of keto-friendly foods. Doing some additional research will help you better understand not only what you should and shouldn’t put on your plate, but also the reasons why.

Which diet is more expensive: paleo or keto?

These diets are usually similar in cost, but keto allows for more flexibility.

Both advocate for eating whole, minimally processed foods and grass-fed beef, pasture-raised poultry and pork, wild-caught fish, and wild game. However, this is more of a focus for paleo, while on keto it’s a recommendation rather than a requirement.

High-quality meat, poultry, and seafood are more expensive, so this can be tough on your wallet. Unfortunately, highly processed products are usually cheaper than nutrient-dense fresh foods.

On the other hand, you’ll be cooking at home more often, which is much cheaper than going to a restaurant.

Which one is better: keto or paleo?

Both can be part of a healthy lifestyle, but which is right for you depends on your goals and personal situation. The food decisions you make, even within the guidelines of each diet, have an enormous impact.

Paleo can be considered healthier since you can eat unlimited amounts of fruits and vegetables. But will you actually eat them? It also allows you to eat mostly meat and skimp on the fruits and veggies, which would give you very different results.

Similarly, keto encourages you to eat high-quality whole foods, but if you have lots of “cheat” days or follow the “dirty” version of the diet, it won’t be nearly as healthy.

Keto can be better than paleo for vegetarians, since paleo excludes many plant-based protein sources, like tofu, beans, and lentils. However, there are more paleo fruits, which can also provide important nutrients.

The best diet is one that you will stick with. If you like the control and organization that comes with tracking macros, keto may be for you. (However, this is also a reason that people with a history of disordered eating should avoid it.) If counting the number of carbs you eat sounds too much like math homework, paleo could be a better fit in the long term.

If you’re interested in cutting down on ultra-processed foods and preparing your own meals with real ingredients, you may want to consider going keto or paleo. Each has potential benefits for specific health conditions, but individual results vary widely depending on how you implement the diet.

Speak to your doctor to help you decide if one of these eating patterns would be a good tool for you in terms of weight loss, treating a medical condition, and/or working toward a healthier lifestyle.

Erythritol vs. Xylitol on Keto.

Stevia vs. Splenda: Which is Better on Keto?.